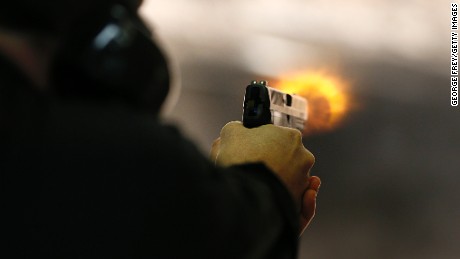 (CNN)When a gunman opened fire Sunday at a gay nightclub in Orlando, killing 50 people, the shooter joined a long line of attackers in the U.S. who have taken multiple lives in one incident.

When it comes to gun massacres, the United States is tragically exceptional: There are more public mass shootings in the United States than in any other country in the world, accordingto a study publishedrecently.
Between 1966 and 2012, there were 90 mass shootings in the United States. Mass shootings are defined for the study as having four or more victims and don’t include gang killings or slayings that involve the death of multiple family members. These shootings include the one in Orlando– now the worst mass shooting in U.S. history –and others in an Aurora, Colorado, movie theater and at Sandy Hook Elementary School in Newtown, Connecticut, both in 2012.
The 90 U.S. mass shootings are nearly a third of the 292 such attacks globally for that period. While the U.S. has 5% of the world’s population, it had 31% of all public mass shootings.
“People have been a little surprised by these statistics,” said Adam Lankford, an associate professor of criminal justice at the University of Alabama, who did the analysis. Lankford presented his work at the American Sociological Association’s annual conference last year and says it’s the first research of its kind to do a global comparison.

How U.S. shootings are different

Lankford combed through the records of every incident and found a few common factors that set the U.S. incidents apart from the rest of the world’s.
In the United States, people have a greater chance of dying in mass shootings if they’re at work or at school. Overseas, these incidents typically happen near military installations.
In more than half the American cases, the shooter had more than one firearm. In global incidents, the shooter typically had only one gun.
And in the United States, there are 6.87 victims on average per incident. In the other 171 countries Lankford studied, the average was 8.8 victims per incident.
Lankford said he thinks there are fewer people killed in these mass shootings in the United States because American police routinely train on how to deal with this kind of incident, even though it happens rarely compared with other kinds of crime.
“Police were slower to respond in other countries and were more likely to be ill prepared when they did respond,” he said.

What’s behind all these mass slayings in the United States?
Many of the shooters in the United States were mentally ill, according to the data. But other studies have shown that the estimated number of cases of mental illness hasn’t gone up significantly while the number of mass shootings in the U.S. has skyrocketed.
Such attacks tripled from 2011 to 2014, according to an analysis by the Harvard School of Public Health and Northeastern University. The Harvard research showed that public attacks in that time occurred every 64 days on average. During the previous 29 years, they happened every 200 days on average. By contrast, the overall U.S. homicide rate and rate of gun violence have dropped significantly over the past two decades.
Some researchers believe these mass killings can be contagious: One killing or shooting increases the chances that others will occur within about two weeks, an “infection” that lasts about 13 days, researchers found in another study.
The copycat phenomenon is more acute in the United States because guns are more accessible than in other countries. “(Access to) firearms (is) a significant predictor of these incidents,” Lankford said.
The United States has more guns than any other country in the world. There are an estimated 270 million to 310 million firearms in circulation in the United States. With the American population at 319 million, that breaks down to nearly one firearm for every American.
Slightly more than one-third of Americans say someone in their home owns a gun, according to the Pew Research Center. The country with the next-highest number of guns is India, with 46 million guns spread across a much larger population of more than 1.25 billion. India doesn’t even crack the top five among countries with the most mass shootings.
The numbers do show that more restrictive gun laws make a difference. Lankford points to Australia as an example. The country had four mass shootings between 1987 and 1996. After those incidents, public opinion turned against gun ownership and Parliament passed stricter gun laws. Australia hasn’t had a mass shooting since.

A desire for fame?

There is not, however, the same political will in the United States. With one exception, Pew polls taken after many of the high-profile mass shootings suggest that Americans typically favor more gun ownership after such incidents.
Lankford does have another theory that he has been exploring with current research.
“It’s harder to quantify it, but I’ve been struck by research that shows that being famous is one of this generation’s most important goals,” Lankford said. “It seems like Americans are growing in their desire for fame, and there is no doubt that that there is an association between media coverage that these offenders get and the likelihood that they will act.”
People could also be looking for fame on behalf of a cause such as Islamic jihad, he said.
“There is no doubt that terrorists want fame whether it is for a cause or for themselves, we have seen this dating back to the 1972 Olympics hostage takers,” Lankford said. “If this (Orlando) attack was motivated by radical Islamic fundamentalist ideology, this would be consistent with the intolerance toward gays and lesbians and seeking fame on behalf of this cause.”
The problem with this motivation is that the Orlando shooting has now upped the ante for other mass shooters who may wish to follow.
“The fame-seeking rampage shooters will attempt to kill even more victims. We have seen this become almost a kind of competition,” Lankford said. “What perhaps is most frighting is that if offenders can kill more people and get more fame, the next may try to find ‘innovating’ — and I put quotes around that word, ‘innovating’ — new ways to get attention.”
For instance, Lankford said, no one had carried out a shooting attack in a movie theater until Aurora in 2012 but there was a similar attempt later in the same year. There have been nightclub shootings and there was a bombing at a gay nightclub in London in 1999, but not like this, he said. The concern now will be copycats who will seek similar media attention, he said.
Lankford said if anything good can come out of his work, it’s knowledge that may help others prepare for the unthinkable.
“Our homicide rate is higher than comparable European nations. If anything, though, it is these kinds of attacks that make us stand out so negatively from the rest of the world and give us this violent reputation as a country,” Lankford said. “Frankly, if we want to give the world a message from what we’ve learned from all of this, is to say that, ‘It is possible, these things do happen, so be prepared and learn from it before you have a tragedy of your own.'”

(CNN)Whether you love or hate your job, here’s a position you might be happier in: Chief Wombat Cuddler.   Tourism Tasmania is holding a contest for Australian residents to meet 8-month-old Derek, a sweet little guy who is melting the…