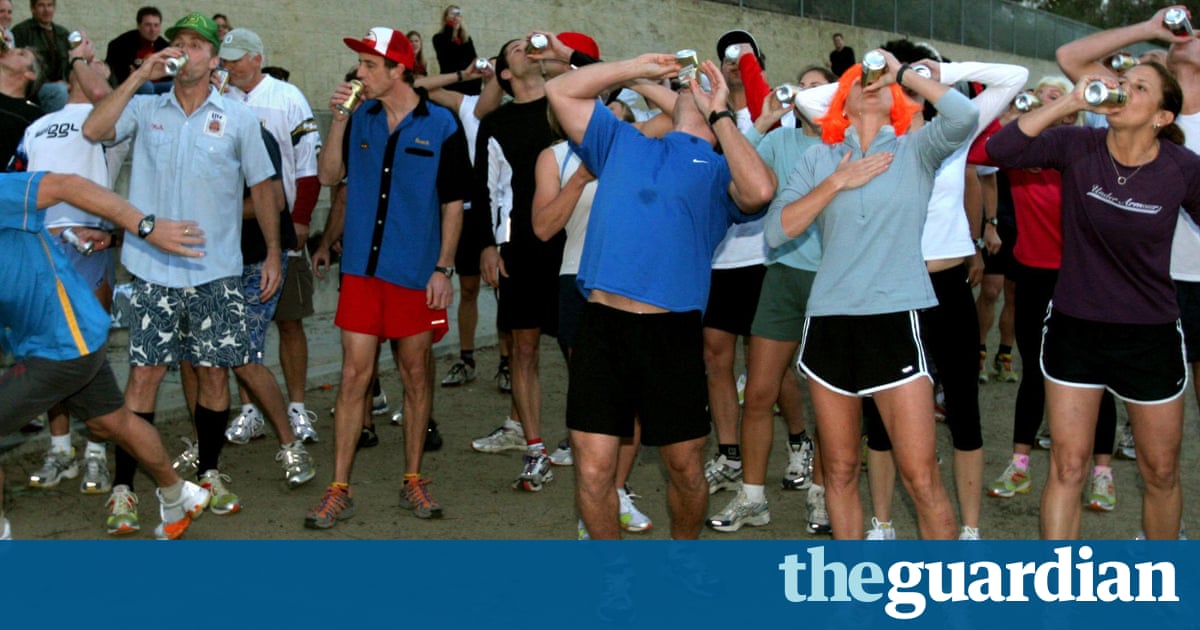 I reckon I know a few people who would be keen.

Reckon? Keen? You move to London, and suddenly you get to talk like Sherlock Holmes?

Thus started the conversation I had with my friend Nick McFalls, co-founder of the Beer Mile World Classic, about bringing the Beer Mile to the UK.

When I lived in San Francisco, Nick and I ran for a track club that was renowned for putting on the best Beer Miles a race where runners drink a beer before each lap of a mile on a track. Our teammate John Markell, known as the godfather of the Beer Mile for his role in codifying the official rules back in the 1990s, led the charge, but he had no problem recruiting a loyal following of passionate athletes to get involved. These were not your average frat guys they were serious runners, drinkers and competitors, obsessed with studying optimal bottle shapes and training with various breathing (and belching) techniques.

Our races were always underground, off the record, and sometimes broken up by local law enforcement (although on that particular occasion, we were busted for having professional film equipment on the track not for chugging beers in a public place). But when our fellow Californian, James Neilson, became an overnight YouTube superstar with his viral sub-five-minute performance, something shifted. What had always been a cultish niche taken extremely seriously by a small clan of weirdos was suddenly experiencing mass appeal.

Runners around the world emerged from the depths of the internet, challenging and laying claim to Neilsons record. ESPN, Runners World and Fox News were covering the Beer Mile phenomenon and the Wall Street Journal put us on the front page.

I have a theory for how something as seemingly ridiculous as the Beer Mile found itself in the international spotlight: we are living in an era of mass disillusionment with sport athletics especially. Runners, and other sports fans, are hungry (thirsty?) for impressive feats of strength that are real. Elite beer milers are not superhumans getting paid millions of dollars to use any means legal or otherwise to manipulate their bodies into muscle machines. The worlds best beer milers are genuinely fascinating people, with jobs, families, rigorous training schedules and a myriad of quirky passions. They are true heroes.

We wanted to give this phenomenon a stage. We wanted to give the athletes and their enthusiastic community of fans a place to come and drink together. But mostly, we wanted to throw a massive party. So in 2015, the inaugural Beer Mile World Classic took place in San Francisco. (Well, technically, it took place on Treasure Island off the coast because we couldnt get the permits to run it in the city.) Americans, Canadians and Australians competed in the first ever international championship, almost 300 people ran their first beer mile and the event had more viewers than the IAAF World Track & Field Championship where Olympians were vying to break the (sober) mile record.

But lets be honest you cant call it a World Classic if there are only three countries. And you certainly cant claim to be a champion in a drinking race if youve never competed against the British. Perhaps no other country on the planet has such a rich and longstanding history of beer running. If you live in the UK and have ever joined a running club, ran a local race, or spectated a cross country meet, you know exactly what I am talking about. On this side of the pond, post-run pints are more common than the post-run quad stretch. Its not all that uncommon to find beer being served at a race aid station instead of water.

So this year, we challenged our North American and Ozzie champs to put their money (beer) where their mouths are and come over to this here Island for a proper go at a Beer Mile championship. The event itself will be a mixture of all our favourite things (yes, I said favoUrite):

I cannot think of a better way to spend a Sunday in the best city in the world.

A United Kingdom-based teacher is making the doll industry even more inclusive with the world’s first Jamaican Patois-speaking doll line. Saffron Jackson told the Jamaica Star that she was inspired to create Zuree Dolls when she tried looking for black…

If humans do not take swift action to curb greenhouse gas emissions, annual coral bleaching events will soon decimate nearly all of the world’s coral reefs, a United Nations-backed study has found. And as Australia’s Great Barrier Reef has shown, bleaching can result…

(CNN)Novak Djokovic crashed out of Wimbledon in dramatic fashion after going down in four sets to U.S. star Sam Querrey. The World No.1 and defending champion was beaten 6-7 1-6 6-3 6-7 in a pulsating rain-delayed clash on Court 1….