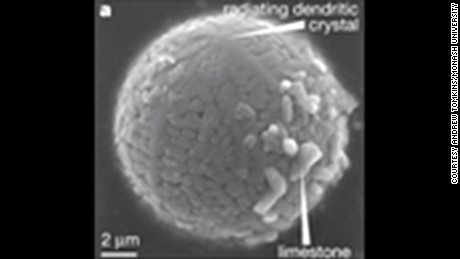 (CNN)Our world is constantly bombarded by space dust, with most of it burning up in our atmosphere.

However, the micrometeorites that made it safely to Earth may contain ancient information about the planet’s early history.
Scientists were able to find some of the oldest micrometeorites and examine them to understand our world’s environment. What they discovered is that Earth’s present-day upper atmosphere has the same amount of oxygen as it did 2.7 billion years ago, according to a report published Wednesday in the journal Nature.
Earth’s atmosphere has four layers that protect the planet from harmful radiation. Our modern atmosphere is divided into the troposphere, where we live, then the stratosphere, mesosphere and thermosphere. Our atmosphere isn’t just oxygen, though. Earth’s present-day mix has 79% nitrogen, 21% oxygen and a few other elements mixed in.
The new findings are surprising because they challenge the common theory about the Earth’s upper atmosphere.
“Geologists are generally taught that the atmosphere 2.5 billion years ago contained essentially no oxygen gas,” Andrew Tomkins, of Monash University in Melbourne, Australia, and lead author of the study, told CNN.
Theories about Earth’s ancient atmosphere originally were based off what scientist know about the gases emitted from volcanoes and the way ultraviolet light breaks down certain molecules.
“Scientists have good evidence that the lower atmosphere contained almost no free oxygen back then, but they haven’t had a good way of determining the chemistry of the upper atmosphere,” Tomkins said.
The findings are the first time anyone has found a way to sample the chemistry of the upper atmosphere from Earth’s past, Tomkins said. The new information will give scientists the opportunity to refine their understanding of Earth’s atmosphere billions of years ago.
“This helps us understand how microorganisms evolved and modified our atmosphere throughout Earth’s history,” he said.
Micrometeorites entering our atmosphere today chemically interact with the upper mesosphere and lower thermosphere
Typically, space debris burns up in our atmosphere and becomes the shooting stars we see at night. But some micrometeorites that entered Earth’s atmosphere long ago were traveling incredibly fast, causing them to heat up and react to the air.
The reaction stops quickly, much like how meteors are short-lived in the night sky, and this process essentially fossilized some of the chemistry from Earth’s upper atmosphere.
The micrometeorites that were examined were made of iron metal, and no bigger than the width of a strand of human hair — barely visible to the naked eye. They were unearthed in a region of western Australia, known for having some of the oldest rocks in the world.
Micrometeorites can also be found in Antarctica, Greenland and the deep sea floor.
Originally, Tomkins and his team wanted to study how much space dust entered Earth’s atmosphere billions of years ago as opposed to today, but once they discovered the oxidized micrometeorites their focus shifted.
The next step for the team is to examine the micrometeorites closely to find out the chemical make up of Earth’s atmosphere billions of years ago.

(CNN)From Kevin Rudd to Julia Gillard, back to Rudd and then to Tony Abbott, it seems Australia can barely keep one leader for a single term in office. Less than a year ago, Abbott was ousted by his longtime rival…