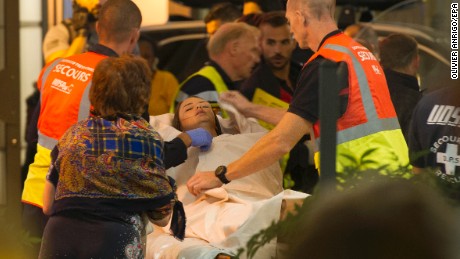 (CNN)The Bastille Day terror attack in Nice, France has led to an outpouring of shock and sympathy, with world leaders calling the carnage an assault on democratic values.

“Today’s horrendous attack in Nice is an attack against innocent people on a day that celebrates Liberty, Equality, and Fraternity,” U.S. Secretary of State John Kerry, said in a statement.
At least 84 died, according to French media, when a truck plowed into a crowd just after a fireworks show in celebration of Bastille Day — a national holiday and France’s equivalent to July 4.
U.S. President Barack Obama responded in a similar manner: “On this Bastille Day, we are reminded of the extraordinary resilience and democratic values that have made France an inspiration to the entire world.”
Statements of condolence have poured in from leaders across the globe.
Among those condemning the attack and expressing sympathy for the victims were Indian Prime Minister Narendra Modi, Chinese Premier Li Keqiang, South Korean President Park Geun-hye, Canadian Prime Minister Justin Trudeau, Belgian Prime Minister Charles Michel, and Australia’s Prime Minister Malcolm Turnbull.
“Only eight months ago we mourned for the victims of terrorist attacks in Paris. Now once again we mourn for the victims of another murderous act of terror in France overnight, on Bastille Day,” Turnbull said in a statement.

Turkey – itself a target of multiple recent attacks — said that “terror, before anything, is an act of rape against humanity and universal values.”
“Heart-to-heart, we share the pain of the French people,” the Foreign Ministry of Turkey said.
Pope Francis said he was in “solidarity with the suffering of the victims and of the entire French people this day that should have been a great holiday.”
In the Middle East, Al-Ahmad Al-Jaber Al-Sabah, commander of the Military of Kuwait, said he supports “all measures France might take” to protect its security, according to Kuwait state news KUNA.
Palestinian President Mahmoud Abbas sent the French president a message of condolence, in which he also condemned the attack as “cowardly,” according to Palestinian media.
Multiple authorities — among them the world’s international police organization, Interpol — responded to the event by promising the French authorities full support in bringing those responsible to justice.
The United States has taken a strong stance against the attack, which the White House described as “what appears to be a horrific terrorist attack.”
Obama referred to France as America’s “oldest ally” and said he had directed his team to assist French officials in all ways necessary.

Hours before the attack, many international leaders, including John Key, the Prime Minister of New Zealand, took part in the Bastille Day parade in Paris; an event that has come to represent “fraternity.”
“It is regrettable that on the day eternalized fraternity as the motto of the French people, an attack destroyed the lives of so many citizens,” Brazilian president Michel Temer tweeted.

(CNN)Scientists believe that 10 million species still await discovery around the world. And every year — on the birthday of Carolus Linnaeus, the 18th century Swedish botanist considered the father of modern taxonomy — the International Institute for Species Exploration…