The England manager, Roy Hodgson, has failed in the Euro 2016 group stages to find a solution to his teams inability to finish off lesser opponents despite dominating possession 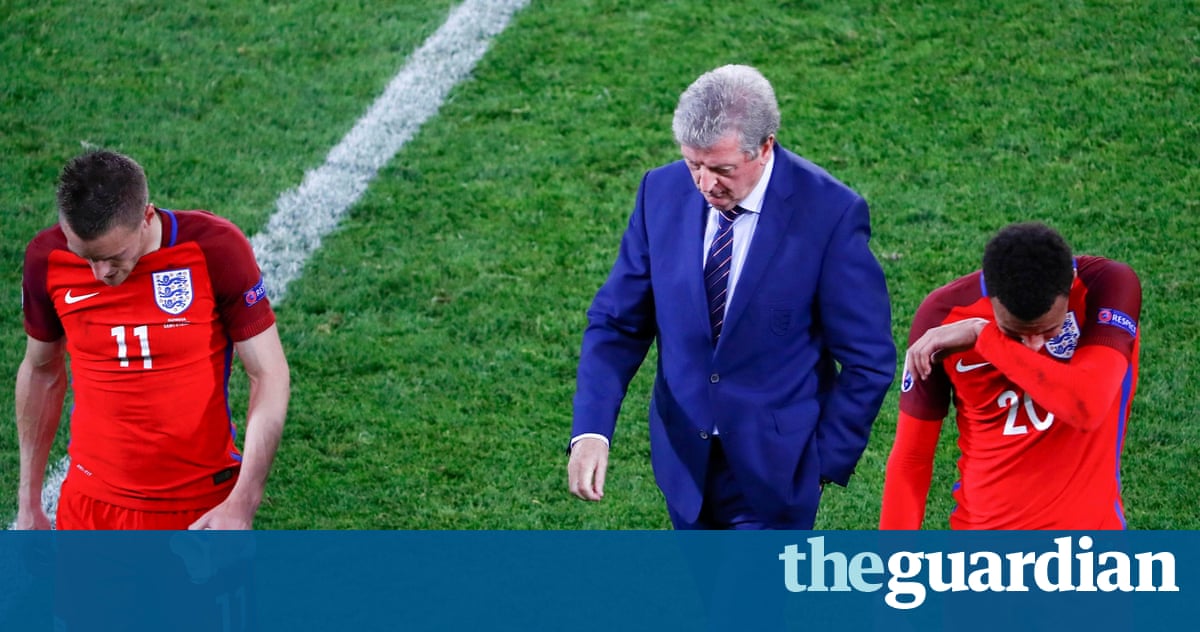 Englands reaction to a goalless draw and the runners-up berth in Group B felt stage-managed. Players trooped away from Stade Geoffroy-Guichard late on Monday night offering up well-rehearsed soundbites. Jordan Henderson spoke of how fresh a radically altered team had been and echoed his managers post-match comments that, at some point, this side will thrash someone. Joe Hart focused on his own unswerving belief in the collective and an eagerness to build on three good performances.

It was all very on-message, a public show of conviction in underlying qualities and an attempt to offer reassurance of better times in store: the frustration will pass; the results will come; whoever comes up against England next is in for a hiding. It is only right that a team cling to the positives, particularly when braced for criticism. There had been promise aplenty in their play against Russia, Wales and Slovakia and rarely have England monopolised possession to such an extent in three fixtures running at a major tournament. Yet the upbeat PR was a little too polished in the context of the campaign.

Three games into Euro 2016 the suspicion nags that everything else is being done on the hoof. England do seem to have a remarkable propensity to overcomplicate just as everything would appear to be going swimmingly. One need only recall Fabio Capellos unnecessary and, ultimately, costly brain-freeze on the eve of the 2010 World Cup.

The current team enjoyed a pristine record in what was admittedly a stroll of a qualification campaign and had 40 weeks between booking their place at Euro 2016 with a victory in San Marino in early September and their first match in France to experiment, plan and prepare. They took a young team to Berlin in March and beat the world champions and, just to be on the safe side, organised a trio of pre-tournament friendlies to conduct their final tactical tweaks.

Yet, even with more than nine months and 10 fixtures after the win in Serravalle, England still seem as perplexed as ever as to their best starting lineup. They employed Wayne Rooney in a new midfield brief against Russia, albeit with success, having never used him there before and Roy Hodgson later admitted that his captains second-half withdrawal, much to the Manchester United players frustration, had partly been born of the stresses of adapting to the demands of a relatively fresh role.

Theres an element of work with him to be done in that position, the England manager had said, and he has to concentrate and think very hard about his positional play. Russias equaliser was shipped without the captain on the pitch. Rooney was the only outfield player to start in Marseille who had also begun in San Marino back in the autumn and he is now being used in a completely new position.

Hodgson would rightly argue circumstance has played a part in the radical metamorphosis, with players form and fitness fluctuating and others, particularly from Tottenham Hotspur, forcing themselves into contention. He would point to the attacking nature of all three displays in Group B, to the 65 shots his team have had and to their dominance over opponents intent only on blunting. But was there not an opportunity to give the system a trial run against Turkey, Australia or Portugal in the final friendlies?

The decision to make six changes on Monday and then to send on Rooney, Dele Alli and Harry Kane in search of a winner, merely promoted a sense of chaos. Similarly, might not an out-and-out winger an Andros Townsend, for example have been an asset in unlocking Slovakia in Saint-tienne? Even with his eagerness to cut inside and fire shots at goal, Townsend might have stretched opponents whose ambition did not extend beyond blanket defence. At present this England team rely heavily on their full-backs to provide width and, even though all four have been impressive in their own way, there seems a lack of variety in the squad. Ross Barkley, a playmaker happier in central positions, has yet to kick a ball in the tournament.

Jack Wilshere, for all his undoubted ability, looks a player who had managed only 141 minutes of first-team football for Arsenal all season. It is over a year since he last saw out a whole game. Instead Hodgson chose to bring a quintet of strikers of whom the most experienced has since been converted into a midfielder to France and, while Daniel Sturridge and Jamie Vardy turned the game against Wales, the profligacy over the three games has still left the management baffled as to who should be considered first choice.

That could also be a headache we have to deal with, Hodgson said. All of them have shown a lot of qualities in the games but none of them as yet has really shown he is able to score the goals we need. We have a clear idea of the players we think we would like to play and we will have to wait and see in Nice. If I had bedded down a partnership and one of them had got injured, you would have been saying I should have tried others.

That much is true and it should not be forgotten that, had they benefited from slightly better fortune, England would have won all three games and, on paper, suddenly appear one of the tournament favourites. There are plenty of sides at Euro 2016 who have yet to find their rhythm. Yet is it a surprise they have struggled in front of goal when the supply-line is constantly changing and the only constant across the front is Adam Lallana, a forward-thinker who has not scored a goal at international level after 26 caps?

Many of that impressive sum of shots have been rather hopeful and indicative of a team running out of ideas or guile in the final third, where it is required most of all. In many ways the composition and shape of the front six still seems a work in progress with Hodgson suggesting we will have to decide what our best system is as he contemplated the knockout tie to come. He was being opponent-specific but both Hungary and Iceland, who might await in Nice, will seek to stifle just as Slovakia did. Another exercise in patience probably awaits unless the forward line, presumably with Kane restored, finds its teeth once again. The manager would argue all this constant chopping and changing reflects his overall faith in a young and promising group, returning to the message of the moment. The problem is that too often everything else appears more like an exercise in improvisation.

Nintendos share price soars but there have been safety fears over players visiting secluded locations late at night An app that began as an April Fools joke has become a worldwide phenomenon, taking gamers out of the living room and…