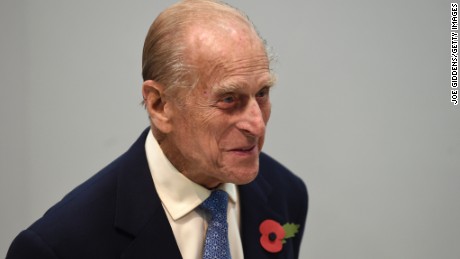 Here’s a look at the life of Great Britain’s Prince Philip, husband to Queen Elizabeth II.

Personal:
Birth date: June 10, 1921
Birthplace: Corfu, Greece
Birth name: Prince Philip of Greece
Father: Prince Andrew of Greece and Denmark
Mother: Princess Alice of Battenburg
Marriage: Queen Elizabeth II (November 20, 1947-present)
Children: Edward, Earl of Wessex (March 10, 1964); Andrew, Duke of York (February 19, 1960); Anne, Princess Royal (September 15, 1950); Charles, Prince of Wales (November 14, 1948)
Military: British Royal Navy, (1939-1953)
Other Facts:
His ancestry is not Greek by blood, but English, Russian, German/Prussian and Danish.
The 1922 overthrow of his brother, King Constantine I of Greece, causes Prince Andrew, Princess Alice and their five children to leave Greece and settle in Paris.
Prince Philip is the youngest of five children and the only son.
After his parents’ separation in 1930, Philip is sent to England and raised there by his maternal grandmother and uncle.
Is a fourth cousin of his wife, the Queen, and like her, he is a great-great-grandchild of Queen Victoria. He is also Queen Victoria’s oldest living great-great-grandchild.
His interests are painting, the environment, horses, flying and writing. He has written books on birds, the environment, carriage driving and other subjects.
After earning his RAF wings in 1953, Prince Philip logged more than 5,900 hours in 59 different types of aircraft over the next 44 years.
His official name is Prince Philip, Duke of Edinburgh, Earl of Merioneth and Baron Greenwich.
His full title is HRH The Prince Philip, Duke of Edinburgh, Earl of Merioneth and Baron Greenwich, Knight of the Garter, Knight of the Thistle, Order of Merit, Knight Grand Cross of the Order of the British Empire, Companion of the Order of Australia, Companion of The Queen’s Service Order, Privy Counsellor.
Timeline:
1939 – Meets future wife, Princess Elizabeth, at the Royal Naval College at Dartmouth.
1940 – Serves as a midshipman, his first posting, on the HMS Ramillies of the Mediterranean Fleet.
1942 – Becomes a sub-lieutenant in the British Royal Navy.
July 1942 – Is promoted to first lieutenant and executive officer aboard the HMS Wallace, a destroyer, and participates in the Allied landings in Sicily during World War II.
February 1947 – Becomes a naturalized British citizen and a commoner, using the surname Mountbatten, an English translation of his mother’s maiden name. Prior to taking the British oath of citizenship, being sixth in line to throne of Greece, he renounces all claims to titles in both Greece and Denmark.
November 19, 1947 – Is invested as a Knight of the Order of the Garter and is given the titles of Duke of Edinburgh, Earl of Merioneth, and Baron Greenwich.
November 20, 1947 – Marries Princess Elizabeth at Westminster Abbey. His name changes from Lt. Philip Mountbatten to His Royal Highness Prince Philip, Duke of Edinburgh.
1948 – Is appointed as a personal aide-de-camp to his father-in-law King George VI.
1950 – Is promoted to Lieutenant-Commander.
1952 – Is promoted to Commander, but his naval career ends with the death of King George VI, and his wife’s ascension to the throne on February 6th.
1953 – Is appointed Admiral of the Fleet, Field Marshal of the Army and Marshal of the Royal Air Force. And is designated regent presumptive by an Act of Parliament. In the event of the Queen’s death or incapacitation, Prince Philip would rule as regent for Prince Charles.
1956 – Starts the Duke of Edinburgh’s Award, which rewards children for personal development and community involvement.
1956-1970 – Serves as president of the Royal Yachting Association.
1957 – By Queen’s decree, is “granted style and titular dignity of a Prince of the United Kingdom.” He is invested as a Grand Master and First or Principal Knight of the Order of the British Empire. This decree restores his birth title of Prince.
1961-1981 – First president of the World Wildlife Fund – UK.
1964-1986 – President of International Equestrian Federation.
June 1968 – Is awarded the Order of the Merit by the Queen, an honor bestowed to those of, “great achievement in the fields of the arts, learning, literature and science,” and is restricted to 24 members.
1975-1980 – Serves as president of the Royal Yachting Association for the second time.
1981-1996 – Serves as president of World Wildlife Fund International.
1996-present – President Emeritus of the World Wildlife Fund.
April 9, 2005 – Prince Philip and Queen Elizabeth II are the only senior members of the Royal Family who do not attend Prince Charles and Camilla Parker-Bowles’ civil wedding ceremony. They do attend the dedication service.
November 10, 2005 – His 58th wedding anniversary makes him the longest-serving British consort, out-living the wife of King George III, Queen Charlotte.
October 23, 2006 – Inspects British forces in southern Iraq.
May 3-8, 2007 – Prince Philip and the Queen visit the United States for the 400th anniversary of America’s first British settlement in Jamestown in 1607. They attend the Kentucky Derby on May 5 and a state dinner at the White House on May 7.
April 1, 2009 – Along with Queen Elizabeth II, meets President Barack Obama and First Lady Michelle Obama at Buckingham Palace.
June 10, 2011 – The Duke’s 90th birthday makes him the oldest-serving royal consort.
December 23-27, 2011 – Undergoes treatment for a blocked coronary artery at Papworth Hospital.
June 4-9, 2012 – Prince Philip is hospitalized for a bladder infection at King Edward VII Hospital in London. He misses part of the Jubilee celebrations commemorating the Queen’s 60th anniversary on the throne.
August 15-20, 2012 – Is treated at Aberdeen Royal Infirmary for a bladder infection.
June 7-17, 2013 – Is a patient in London Clinic, admitted for abdominal pain, has exploratory surgery the following day and is released following his recuperation.
January 26, 2015 – Australia Prime Minister Tony Abbott awards that nation’s top honor, Knight of the Order of Australia, to Prince Philip for his life of service throughout the Queen’s reign.

Australian politicians calling for a ban on Muslim immigration miss the point and make the effort to create a decent, diverse society even harder The anti-Muslim preachers have wasted no time in their attempts to hijack the Orlando massacre to…