In Paris and London, the Super Bowl winner faces two Sevens World Series events that could decide a Games dream fuelled by memories of his father 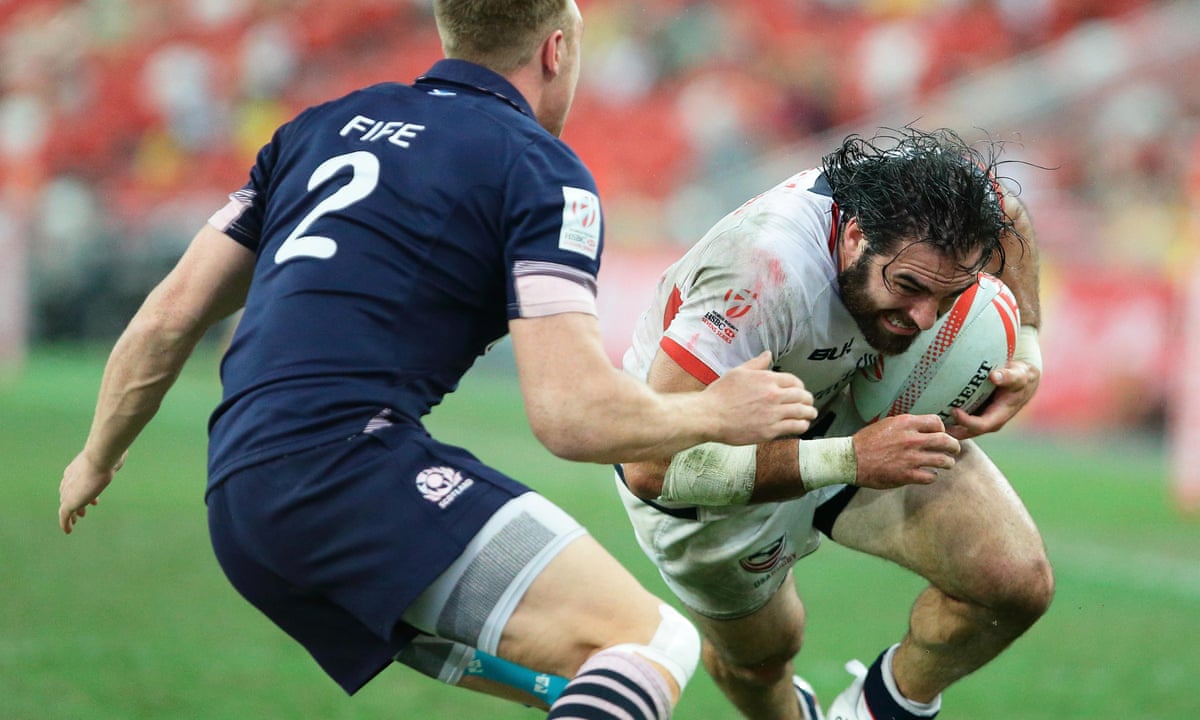 In Singapore last month, Nate Ebner ran on to a rugby field. He was there to represent the USA sevens team, having taken leave from the New England Patriots in pursuit of an Olympic place. He ran, smack, into Virimi Vakatawa.

Enveloped by the Fijian Frenchman, the 6ft, 210lbs NFL player went up, he went sideways, and he crashed to the floor with a smash. He made the ball available and the game went on.

Among those fascinated by the relationship between NFL and rugby union, by which players are supposedly stronger or tougher or faster, the tackle became a meme.

Thats part of the game, man, Ebner said with a wry laugh a month later, his ears perhaps still ringing. He was speaking from Paris, where the HSBC Sevens World Series begins a two-tournament finale that ends with the London Sevens at Twickenham next weekend, the US Eagles defending their title.

People get hit and you hit people. The only thing that surprised me was I got lifted off the ground like that. I do that all the time to people whenever I get a chance to too. You get the shots taken at you. If you dont like it, youre doing the wrong sport.

Though he is a special teams specialist with a Super Bowl ring and a two-year, $2.4m contract extension, rugby fans would say Ebner is now playing the right sport. Or, at least, the sport in which he grew up.

Ebner was born in Dublin, a suburb of Columbus, Ohio. His father, Jeff, was a rugby player. Nate played his first rugby at 13, with his dad in a mens game. He has spoken of a mutual philosophy always finish strong imbued on and off the field through intense and physical competition.

He played at high school and then starred at fly-half or full-back nicknamed Leonidas, for the Spartan king for Ohio State and US junior national teams. When he aged out out of representative play, he looked for tough competition.

He could have gone to seek his fortune overseas, in Europe or New Zealand. Instead, he switched to football with the famous Buckeyes. Though he essentially learned to be a defensive back from scratch, he coped. In the 2012 NFL Draft, the Patriots took him in the sixth round. In 2015, against the Seattle Seahawks in Arizona, he won that Super Bowl ring.

The formative event in his life, however, happened in 2008.

Jeff Ebner ran an auto reclamation business in Springfield. It was a tough world; robberies were common. In November 2008, in one such attempted robbery, Jeff Ebner was beaten to death. In 2010, a man was convicted and sentenced.

Nate Ebner has told the story many times. Most of his questioners have wanted to know what, other than the lure of Olympic gold, could lure him away from Americas Game. Asking him to spell it out yet again seemed unnecessary. But had it helped to have to do so so often?

He exhaled. I dont know. Ive got to the point right now where Im comfortable about it, I guess. I think Dad would be proud of me and Im proud he was my Dad. The way he raised me was in my eyes pretty spectacular compared to what Ive seen growing up, with other kids and crappy parents, if you will.

This is my chance to really talk about a guy who really dove into his sons life and really had a strong effect on him. I think more parents should be like that.

Those who have lost a parent when young know that whatever the passing of time, whatever ways to cope are sought or found, nothing is ever quite the same. Ebner paused.

I dont know, man. I guess if more people were like that I wish once you get past

Im comfortable talking about it because I think [my career] is a really strong example of how being involved in your childrens lives can have a really strong effect. It definitely had that effect on my life.

For me telling the story, its especially important for young people with kids who might hear me. You cant just have children and not

(CNN)Can your pet fish recognize your face? A new study says, Yes, it probably can. Researchers studying archerfish found the fish can tell a familiar human face from dozens of new faces with surprising accuracy. This is a big, big…