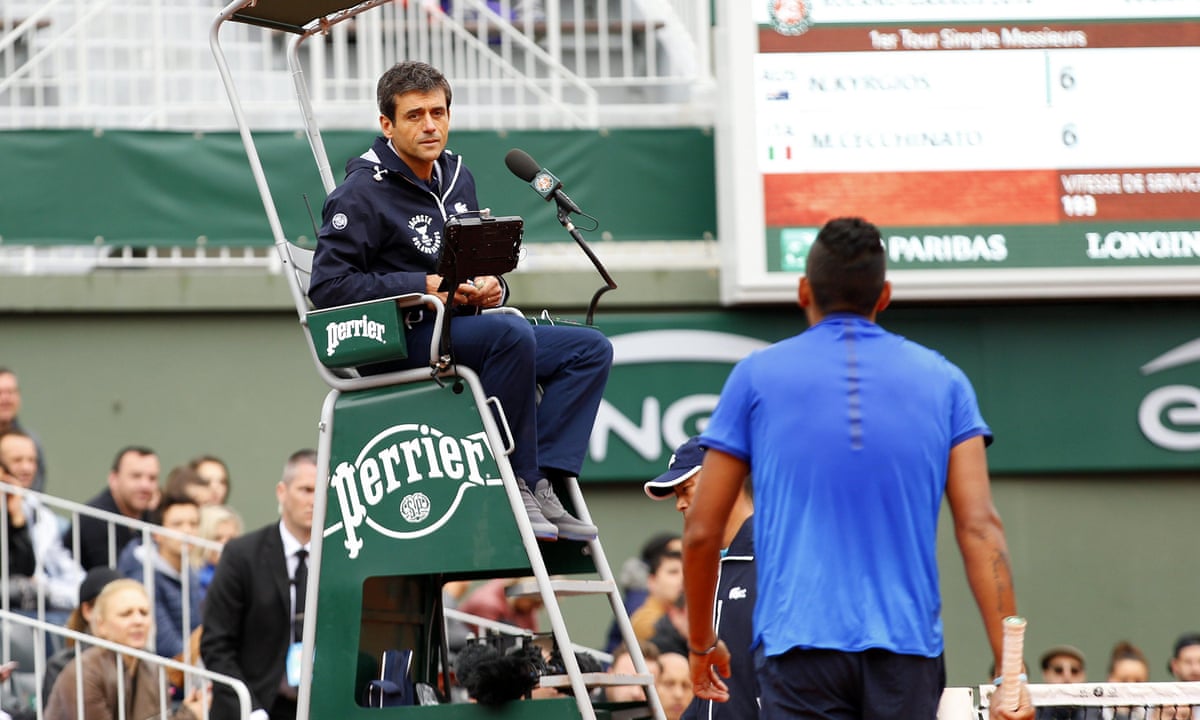 Nick Kyrgios has courted controversy during his first-round French Open victory with a foul-mouthed rant in which he accused experienced umpire Carlos Ramos of unbelievable bias.

Australias Kyrgios was issued a code violation during his 7-6 (8-6), 7-6 (8-6), 6-4 victory over unheralded Italian Marco Cecchinato on Sunday for screaming for a towel from the ball boy at a wet Roland Garros.

The volatile 21-year-old took exception to Ramos ruling which followed a key point in the first-set tiebreak, arguing that he had raised his voice to get the ball boys attention purely because of the raucous atmosphere inside the bullring as showcourt one is commonly known.

A code violation for saying towel loud? Now Ive really seen it all, a mystified Kyrgios said to Ramos after being handed the code violation. What rules am I breaking?

On his next service, Kyrgios was bugged by a member of the crowd who cheered support during his ball toss and again directed his complaints at Ramos. But thats alright? Screaming out during my serve? he queried.

Kyrgios won that service point to go 4-2 up in the tiebreak, before resuming his verbal battle with Ramos. Thats f**king bulls**t, Kyrgios barked, before referencing an incident in Rome last week where world No1 Novak Djokovic pushed away the arm of chair umpire Carlos Bernardes during a win over Rafael Nadal.

How can you sit there and give me a code for that? But when Djokovic pushes an umpire out of the way thats alright? Tell the whole world thats alright.

The incident sparked the crowd, who had been largely subdued during the first set, into a chorus of boos but Kyrgios recovered to take the first-set tiebreak in 54 minutes.

It concluded an eventful first set in which Kyrgios fell heavily on his left elbow after slipping while attempting a volley, where he was helped to his feet by Cecchinato.

He also had the crowd applauding following an act of good sportsmanship when he located a missing racquet dampener for Cecchinato, before embarking on his spat with Ramos.

The world No19 calmed down in the second set but still struggled to shake the Italian, who again forced a tiebreak which was taken by Kyrgios. Kyrgios appeared frustrated at his inability to put Cecchinato away and was unable to convert his first 10 break point opportunities.

On the 11th, Cecchinato double-faulted to give Kyrgios an advantage in the third set which he would not let go closing the match out in two hours and 21 minutes.