Climate change and strong El Nio cause hundreds of kilometres of reef to bleach, as higher temperatures stress the coral 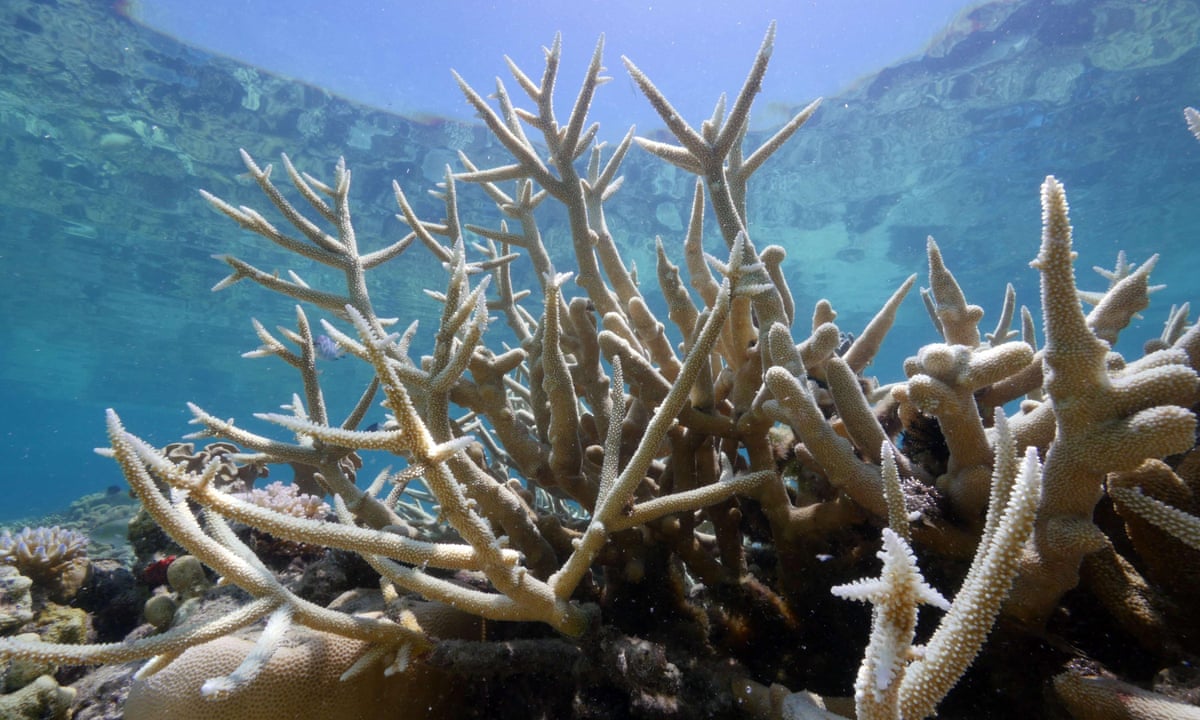 The mass coral bleaching event smashing the Great Barrier Reef has severely affected more than half its length and caused patches of bleaching in most areas, according to scientists conducting an extensive aerial survey of the damage.

The good news with my last flight is that I found 50 reefs that werent bleached, so that may be the southern boundary, said Terry Hughes from James Cook University. Hughes is the head of the national coral bleaching task force, which has been conducting flights over the length of the reef, mapping bleached areas and recording the severity of the damage.

Climate change and a strong El Nio have caused hundreds of kilometres of the reef to bleach, as the higher water temperatures stress the coral, and they expel their symbiotic algae. If the bleaching is bad enough, or the temperatures remain high for long enough, the corals die, putting the future of reefs at risk.

The mass bleaching on the Great Barrier Reef is part of what the US National Oceanographic and Atmospheric Administration has called the third global bleaching event the first occurred in 1998.

Initial reports suggested only the most northern and remote areas of the Great Barrier Reef were bleaching, but as aerial surveys have continued, scientists have struggled to find a southern boundary.

The latest find of a stretch of unaffected reefs around Mackay was a small piece of good news, Hughes said.

But he said its significane would be unclear until reefs further south were examined.

It may be a false southern boundary, Hughes said. The reefs around Mackay have unusually large tides, which might have pulled in cooler water and saved the coral there.

So far, the surveys reveal there are severely bleached reefs almost as far south as Cairns, and patchy bleaching almost to Mackay.

Morgan Pratchett from James Cook University said there was some bleaching even further south. There is reasonable levels of bleaching as far south as the Keppels, which is even more than we suspected initially, Pratchett said.

Hughes planned to fly over another 150 reefs, creating a total of about 900 surveyed. Only then will the group have a complete picture of how bad the bleaching is.

The next step will be to examine how much of that bleached coral has died. If the corals are severely bleached, then a lot will die. If they are lightly bleached, which is the case with a lot of reefs south of Townsville, then theyll regain their colour over the next couple of months and there wont be much mortality, Hughes said.

Two weeks ago, the Great Barrier Reef Marine Park Authority reported half the coral in the northern parts of the reef were dead. Hughes said that was consistent with reports from divers north of Port Douglas.

Hughes said this was by far the worst bleaching event to have hit the Great Barrier Reef. He said it was three to four times worse than in 1998 or the second great bleaching in 2002.

Last year, the Great Barrier Reef narrowly escaped being listed as in danger by Unesco, even though environmental groups said it clearly met the criteria.

Hughes said the outstanding universal value of the reef was now severely compromised.

Ariane Wilkinson, a lawyer at Environmental Justice Australia, said the bleaching might cause Unesco to reconsider its decision.

[Unesco] werent scheduled to examine the reef this year but in light of the terrible bleaching it is entirely possible that they may decide to look at the reef, she said.

If the World Heritage system is to have any value, it must address the most serious threats to the most iconic examples of world heritage, she said. If any site falls into this category, it is the … Great Barrier Reef.

Dana Nuccitelli: Earths record hottest 12 consecutive months were set in each month ending in September 2015 through May 2016 2014 and 2015 each set the record for hottest calendar year since we began measuring surface temperatures over 150 years…

A major esports milestone has been reached in Australia, with League of Legends officially being included in the countrys largest university sports competition for the first time ever. Organized by Australian University Sport and backed by the Australian Sports Commission,…

Whats it like to have an open relationship? Five people on why having sex with someone other than their partner works Imagine this: your partner is sleeping with another woman or man, and you know about it. In fact, youre…

International Society for Reef Studies presidents say prime minister should prioritise reef after devastating damage As the largest international gathering of coral reef experts comes to a close, scientists have written to the Australian prime minister, Malcolm Turnbull, calling for…