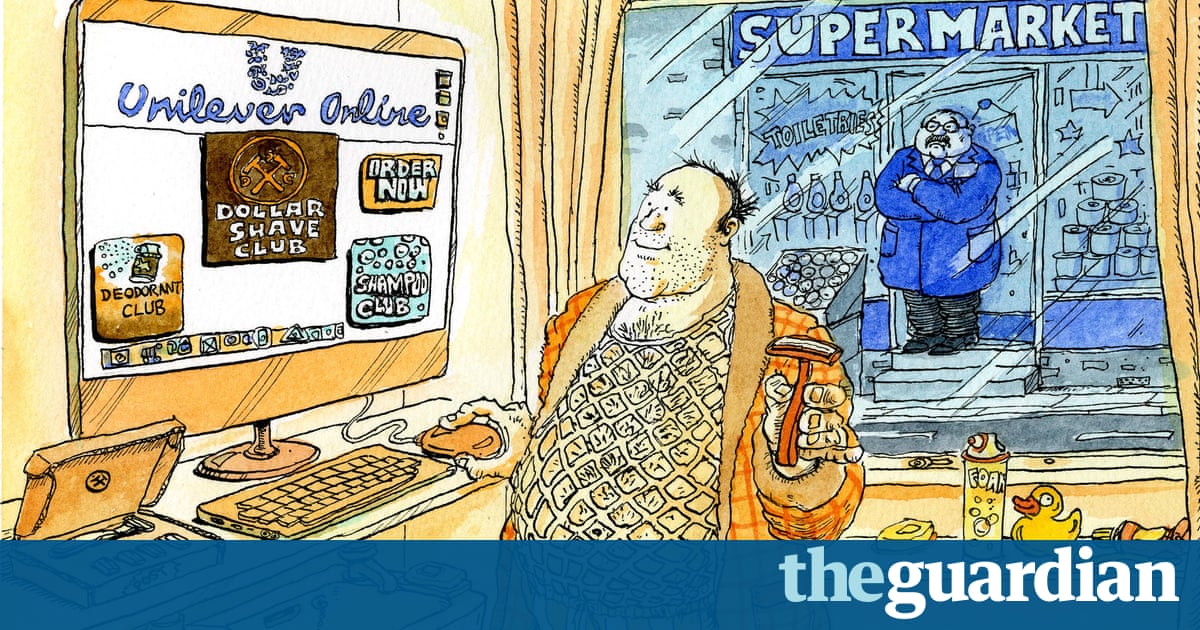 Dollar Shave Clubs razors are fucking great, the companys founder declared in its first advert. Michael Dubin, who started the business four years ago, last week convinced Unilever of their merits, too.

In buying Dollar Shave Club for an estimated $1bn, the consumer goods company could be sending a signal about the way we shop. Post-deal analysis focused on what Unilever could add to Dollar Shave Club, which has shaken up the US male shaving market with a monthly subscription service and a viral marketing campaign.

The company sends grooming products to customers for as little as $1 a month. In that first fucking great ad, Dubin also tells customers that they are being ripped off when buying branded razors because theyre simply funding celebrity endorsements, and technology they do not need.

Do you like spending $20 a month on brand-name razors? Nineteen go to Roger Federer, Dubin says in the ad.

Unilever, one of the worlds biggest companies, will now provide backing for Dollar Shave Clubs expansion in the US where it has already claimed 5% of a shaving market dominated by Gillette and eventually into Europe and the rest of the world.

But Dollar Shave Club will also bring something to Unilever: expertise on how to sell products directly to consumers. Unilever owns some of the best-known brands in the world including Magnum ice cream, Flora margarine and Dove soap. For decades, its model has been to sell its products to customers through retailers, such as Tesco and Sainsburys in the UK.

However, the internet offers a new avenue for manufacturers. It provides the opportunity to sell directly to customers without shops being involved. Customers could buy one-off items from a manufacturers website or, like they do with Dollar Shave Club, take out a subscription that means products are sent to them at regular intervals.

Dollar Shave Club has made this work for male grooming products, so why couldnt there be a club for Lynx deodorant or Tresemm shampoo, which are also Unilever brands?

Unilever has already built a team of up to 800 to work on its e-commerce side, and it is hoping to learn more through Dollar Shave Club.

I think you will see implementations of the learnings from them in businesses we already have outside of the US, Paul Polman, Unilevers chief executive, said. Then we will look at opportunities to introduce the model in other countries, where you need a certain penetration of online shopping.

Polman said countries where online shopping is already popular such as China were potential markets for direct selling. He also said the companys prestige beauty brands and its Australian T2 teas could also be sold this way. Unilever already sells T2 directly to customers through branded shops in England and New York City as well as Australia.

This could have implications for all retailers. Supermarkets in particular are already under pressure from Amazon, discounters and convenience stores: the last thing they need is another front to compete on.

Although it is early days for Unilever, there is logic behind manufacturers selling directly to customers. They can cut the costs of dealing with retailers and take more control of their products. A consumer brand can lose prestige if it is seen on supermarket shelves next to cheaper, own-label alternatives.

Starting to sell directly to consumers will not be a straightforward change, which is why it hasnt happened yet and why Unilever is buying the expertise of Dollar Shave Club. In 2008, Procter & Gamble, Unilevers great rival, bought a stake in online retailer Ocado, yet it has still to launch a meaningful retail service.

Nonetheless, every now and again a deal comes along that signals a shift in direction for an industry. And Unilevers acquisition of Dollar Shave Club is one of them.

Even nimble Fox may not bound over barriers to trade

Theres quite a competition over which of Theresa Mays ministers has the toughest post-Brexit job. A good case could be made for Philip Hammond, the Alistair Darling of our time, inheriting the economy just as things are turning sour. Or for David Davis, who has the task of balancing immigration controls against access to the single market as he negotiates Britains departure from the EU.

Spare some sympathy, though, for Liam Fox, heading the new ministry of international trade: he has perhaps the toughest job of the lot.

There has been a lot of talk since the referendum about how the UK can now cut its own trade deals with countries such as China, Brazil, India and the US. So, Fox can be nimble, avoiding the cumbersome processes that have bedevilled, for example, the attempt by Brussels to agree the Transatlantic Trade and Investment Partnership with Washington.

It is a nice thought, conjuring up images of Sir Francis Drakes warships playing havoc with the Spanish Armada as it slowly made its way up the English Channel.

The analogy has its limitations, however: not least the fact that Drake had no trouble finding sailors to crew his vessels while Fox has only a handful of UK officials with any experience of negotiating trade deals and is looking to bring in foreign mercenaries.

A shortage of personnel is not his only problem. He arrives in office at a time when global trade is barely growing a far cry from the heady early days of globalisation in the 1990s.

Back then, the UK was able to exploit the fall in the value of the pound that resulted from Black Wednesday in September 1992 because demand for exports was strong. World trade volumes increased by 7% a year on average during the 1990s.

Then, the current was for more open trade. Today, the tide has turned in favour of protectionism. Getting speedy trade deals that work for Britain is going to be mightily difficult. It is cold out there.

Sports Direct saga shows need for change in the law

Mike Ashley and the board of Sports Direct should be ashamed of the way their company is described by MPs in a report about its working practices.

Ashleys excuse that he was not aware of many of the incidents that were related to him about employees being mistreated is not good enough. A companys boss has a duty to ensure that staff are treated well.

The board needs a total overhaul, with a new independent chairman to ensure that Ashley sticks to his promise to improve working conditions.

However, more fundamental changes are also required. Directors have a legal duty to deliver value for shareholders, but it is time they had a legal duty to protect the interests of employees too.

This could have two helpful effects ensuring that bosses cannot turn a blind eye to bad working practices; and forcing companies to consider employees when they receive a takeover bid. This could be a handy way to get out of unwanted foreign takeovers.