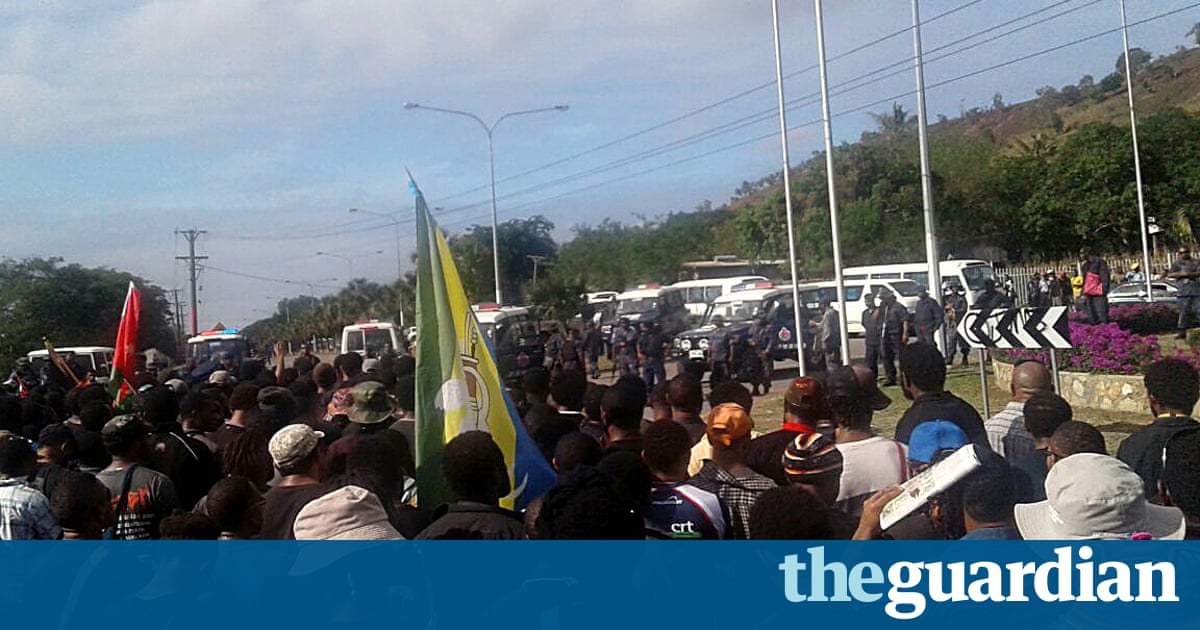 Papua New Guineans took to the streets to protest against government corruption and were met by gunfire, Human Rights Watch has said in a scathing assessment of Australias nearest neighbour.

In its annual assessment of more than 90 countries, Human Rights Watch has warned of the rise of populist leaders threatening the protection of human rights. It says PNG has failed to protect women and children, or to respond to corruption and police violence.

Anger against the Peter ONeill government linked to numerous and high-profile corruption scandals and allegations over recent years became the focus of student protests, culminating in the march on parliament in Port Moresby in June calling for ONeills resignation.

The students, who had boycotted classes, were stopped from boarding buses to parliament where ONeill was set to face a vote of no-confidence. Police opened fire, and 23 people were injured.

ONeill was defiant, and blamed agitators funded by the opposition for the protests, which spread and escalated across the country.

People took to the streets to voice concerns about corruption, and the only government response was gunfire, said Elaine Pearson, Australia director at Human Rights Watch.

Corruption and abuse will only end when abusive officials are held responsible for their crimes.

ONeill, who continues to avoid an arrest warrant over a long-running corruption investigation, survived a no-confidence motion in parliament the next month.

Internal tensions within police also came to a head when the police commissioner, Gari Baki, sacked the head of the anti-corruption directorate following his departments arrest of a supreme court judge, the attorney general and the prime ministers lawyer.

In January 2016, Baki declared he would crack down on abuse by police officers there had been 1,600 complaints between 2007 and 2014. However, Human Rights Watch said it was unclear how many, if any, resulted in criminal convictions of police officers.

Police abuse, including of children, continues to be reported with little accountability even for fatalities or egregious physical abuse.

The report found little else had changed for the better, and said Papua New Guinea remained one of the most dangerous places in the world for women and girls. Police and prosecutors continued their track record of rarely prosecuting cases against perpetrators of family violence, despite a government focus on reform.

The family protection legislation of 2013 was yet to be acted on, and Pearson accused the government of failing miserably to protect women and girls from discrimination and family violence.

Sorcery-related violence continued, with horrific acts committed against women accused of being witches, and the countrys judicial system recorded its first convictions under a 1975 law outlawing abortion, the report highlighted.

Homosexuality remained illegal and punishable by up to 14 years in prison, and the death penalty had not been abolished, despite both issues being subject to recommendations at the UN periodic review. The PNG government has said LGBT rights are not a priority.

The assessment on Papua New Guinea was part of a report on more than 90 countries, including Australia, which was criticised for its continuing poor record on Indigenous incarceration and its treatment of asylum seekers and refugees. Human Rights Watch called for PNG and Australia to work to immediately close the Manus Island detention centre.

The Human Rights Watch director, Kenneth Roth, said the world was seeing the rise of a new generation of populist leaders treating human rights as an impediment to their conception of the majority will.

We forget at our peril the demagogues of yesteryearthe fascists, communists, and their ilk who claimed privileged insight into the majoritys interest but ended up crushing the individual. When populists treat rights as an obstacle to their vision of the majority will, it is only a matter of time before they turn on those who disagree with their agenda.

(CNN)Only the shallow waters of the Rio Grande and a couple of miles separated Mexican drug kingpin Joaquin “El Chapo” Guzman from American soil Saturday. Guzman was transferred from the maximum-security Altiplano lockup in central Mexico to a prison in…