The long read: To understand how the $60bn company is taking over the world, you need to stop thinking about cars 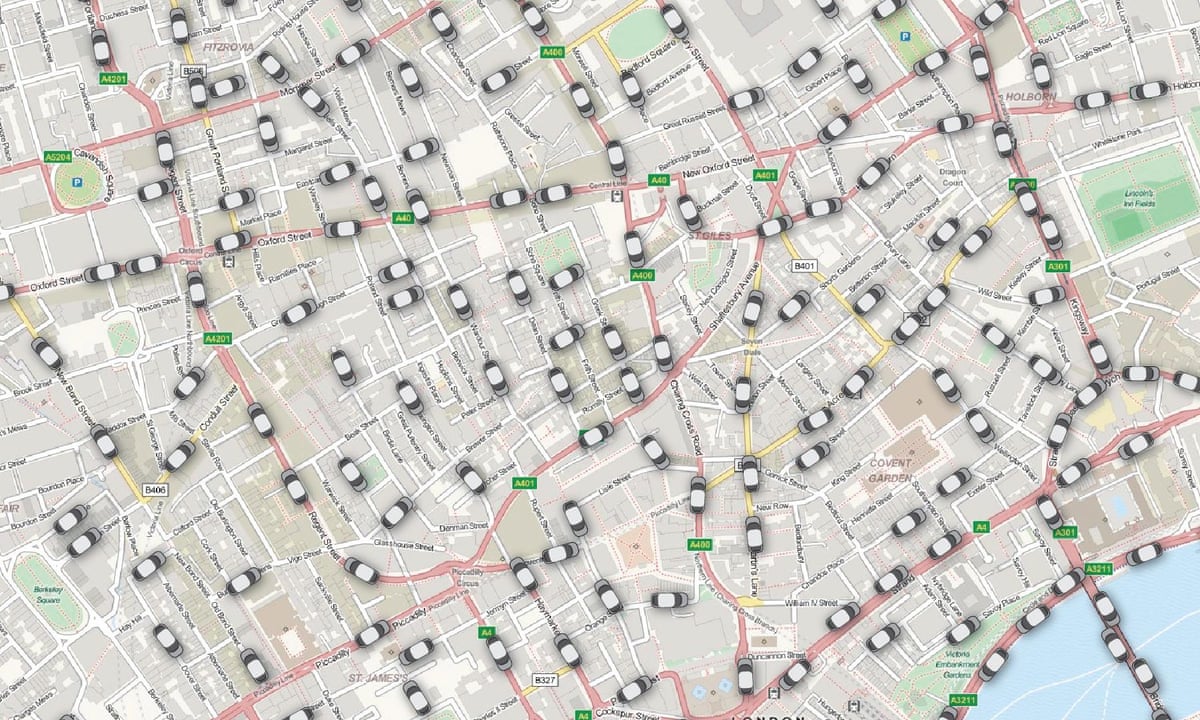 Every week in London, 30,000 people download Uber to their phones and order a car for the first time. The technology company, which is worth $60bn, calls this moment conversion. Uber has deployed its ride-hailing platform in 400 cities around the world since its launch in San Francisco on 31 May 2010, which means that it enters a new market every five days and eight hours. It sets great store on the first time you use its service, in the same way that Apple pays attention to your first encounter with one of their devices. With Uber, the feeling should be of plenty, and of assurance: there will always be a driver when you need one.

When you open the app, Ubers logo flaps briefly before disappearing to reveal the city streets around you, and the grey, yet promising shapes of vehicles nurdling nearby. The sense of abundance that this invokes can make you think that Uber has always been here, that its presence in your neighbourhood is somehow natural and ordained. But that is not the case. To take over a city, Uber flies in a small team, known as launchers and hires its first local employee, whose job it is to find drivers and recruit riders. In London, that was a young Scottish banker named Richard Howard.

Howard was 27 and had recently been made redundant by HSBC, where he sold credit default swaps, a form of derivative that became notorious during the financial crisis. He grew up in Glasgow, where his father sold musical instruments, and never felt entirely at home in the deferential, bonus-driven atmosphere of investment banking. When he lost his job in November 2011, Howard figured that tech must be the coming thing. He began to trawl technology news and, like a lot other people, was struck by reports of a fundraising round for a startup called Uber the following month. It wasnt just the money a valuation of $300m for a company that had been up and running for 17 months but the seriousness of the players involved: Jeff Bezos, the founder of Amazon; Menlo Ventures, one of Silicon Valleys oldest venture capital firms; Goldman Sachs.

On 7 December, Howard found Ubers website and sent them an email. I emailed whatever it was, help@uber, info@uber, and said, Hey, I would love to work with you guys. I live in London. Are you coming to London? he told me recently. By Christmas, Uber had replied. After a couple of Skype interviews, Howard travelled to Paris to meet the Uber team there at the time, Paris was the only city outside North America where the company was operating and in February 2012, Howard was hired. He filled in his contact information on a company-wide spreadsheet. He tried to work out whether he was Uber employee number 50, or 51.

Uber began as a luxury brand. Its tagline was Everyones Private Driver. The companys origin myth is that its two founders, serial entrepreneurs Garrett Camp and Travis Kalanick, emerged from a tech conference called Le Web in Paris in December 2008 and couldnt find a cab. In the age of smartphones and GPS, this seemed to them a ridiculous state of affairs. From the get-go, though, Ubers idea of a car and driver was something lavish and fun. Unlike its main rival in the US, Lyft, whose ride-sharing philosophy derived more from a hey-Im-going-that-way-anyway approach, Uber was built on selling bite-sized access to big black cars and Kalanicks memorable if slightly untranslatable to British ears wish to be a baller.

For Howard, in London, setting up Uber meant finding the right kind of cars. He worked his way through yell.com, ringing up high-end chauffeur companies and trying to persuade drivers to accept jobs from an app they had never heard of. (Uber likes to describe itself as a marketplace: for a commission, it connects drivers and passengers, sets the fee, and handles payment.) In late March, Kalanick, who by this point was Ubers CEO, flew to the UK and emailed his only employee in the country. Yo London, Im here, he said. The two men met in Moorgate and Kalanick outlined his plans for the city. He said, I want to get [Mercedes] S classes on the road for the same price as black cabs, Howard recalled.

London was the 11th city that Uber went into, but it was like no other taxi market that the company had attempted to disrupt. London had the scale and mass transit systems of New York, but it also had the medieval, twisting streetscape and complex regulations of other European capitals. It was already served by a formidable private transport market, with one of the worlds most recognisable taxi fleets the black cabs and a fragmented scene of some 3,000 licensed private hire operators. Just one of these, Addison Lee, had 4,500 cars and revenues of 90m a year. London even had ride-hailing apps, led by Hailo, which had already signed up 9,000 black cab drivers. Kalanick has described London as the Champions League of transportation and said that Uber spent two years plotting its approach to the city.

Howard rented a one-room office on the Kings Cross Road, next door to an Ethiopian church. Two launchers, from Seattle and Amsterdam, arrived. He put a sign on the wall that said #Hailno and tried not to think too much about the competition. We were worried, he told me. We were worried that Addison Lee would get smart, spend 1m which isnt a lot of money for them and make a really nice, seamless app that copied Ubers. But they never did.

(Ford)  (Ford) Previous Next Visitors to the National Inventors Hall of Fame Museum can now take an especially innovative trip through automotive history without having to take more than a few steps.  Ford and the museum, which is on the…