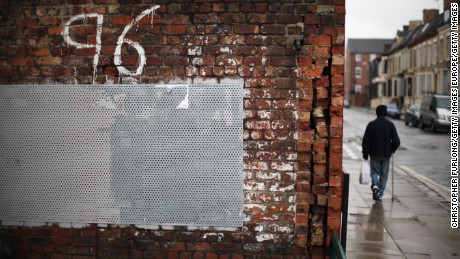 (CNN)Here is some background information about the Hillsborough Disaster, a 1989 tragedy at a British soccer stadium. Overcrowding in the stands led to the deaths of 96 fans in a crush. Another 162 were hospitalized with injuries. It was the worst sports disaster in British history, according to the BBC.

Facts:
On April 15, 1989, more than 50,000 people gathered at the Hillsborough Stadium in Sheffield, England, for the FA Cup Semi-Final football (soccer) match between Liverpool and Nottingham Forest. In order to relieve a bottleneck of Liverpool fans trying to enter the venue before kickoff, police opened an exit gate and people rushed to get inside. More than 3,000 fans were funneled into a standing-room-only area with a safe capacity of just 1,600. The obvious crush in the stands prompted organizers to stop the game after six minutes.
Police initially concluded the crush was an attempt by rowdy fans to surge onto the field, according to the Taylor Interim Report, a 1989 government investigation led by Justice Peter Taylor. As officers approached the stands, it became apparent people were suffocating and trying to escape by climbing the fence.
The Taylor Interim Report describes the scene: “The dead, the dying and the desperate became interwoven in the sump at the front of the pens, especially by the gates. Those with strength left clambered over others submerged in the human heap and tried to climb out over the fence…The victims were blue…incontinent; their mouths open, vomiting; their eyes staring. A pile of dead bodies lay and grew outside gate 3.”
The emergency response was slow, according to the Hillsborough Independent Panel, a 2012 follow up investigation. The problems were rooted in poor communication between police and ambulance dispatchers, according to the panel.
Fans tried to help each other by tearing up pieces of advertising hoardings, creating improvised stretchers and carrying injured spectators away from the throngs, according to the Taylor Interim Report. People who had no first aid training attempted to revive the fallen. From the report: “Mouth to mouth respiration and cardiac massage were applied by the skilled and the unskilled but usually in vain. Those capable of survival mostly came round of their own accord. The rest were mostly doomed before they could be brought out and treated.” It took nearly 30 minutes for organizers to call for doctors and nurses via the public address system.
South Yorkshire Police Supervisor David Duckenfield was in charge of public safety at the event. He was promoted to match commander weeks before the game and was unfamiliar with the venue, according to his testimony at a hearing in 2015. He acknowledged that he did not initiate the police department’s major incident plan for mass casualty disasters, even as the situation spiraled out of control. Duckenfield had originally blamed Liverpool fans for forcing the exit gate open, a crucial detail that he later admitted was a lie. He retired in 1990, conceding he was probably “not the best man for the job on the day.”
Timeline:
August 1989 – The Taylor Interim Report is released, offering a detailed overview of how the tragedy unfolded. The report is named for Justice Peter Taylor, who is leading the investigation.
January 1990 – The Taylor Final Report is published, proposing a number of reforms for soccer venues. Among the recommendations: football stadiums should replace standing room terraces with seated areas to prevent overcrowding.
August 1990 – Although the Taylor Interim Report faulted police for poor planning and an inadequate response, the Director of Public Prosecutions announces that no officers will face criminal charges.
1991 – The deaths of the fans are ruled accidental by a jury during an inquest. The members of the jury could have returned a verdict of unlawful killing, faulting the police for acting recklessly and compromising the safety of fans. Their other option was an open verdict, an inconclusive ruling.
August 1998 – A group of victims’ families files civil manslaughter charges against South Yorkshire Police supervisors David Duckenfield and Bernard Murray.
2000 – The case goes to trial. The jury deadlocks on Duckenfield and finds Murray not guilty of manslaughter. Murray dies of cancer in 2006.
April 2009 – As England observes the 20th anniversary of the tragedy, a new investigation is launched by a group called the Hillsborough Independent Panel.
September 2012 – The panel releases its findings, detailing the numerous failings of authorities on the day of the tragedy and a subsequent cover up that shifted the blame from police to fans. The panel also proclaims that 41 of the 96 victims could have been saved if police responded to the crisis more rapidly. The findings prompt Prime Minister David Cameron to issue an apology to the victims’ families.
December 2012 – The High Court quashes the accidental death ruling for the victims, setting the stage for a new investigation and possible criminal charges.
March 31, 2014 – A new round of inquests begins in a courtroom in Warrington, England, built specifically for the case. There are nine members of the jury. They will consider a number of issues relating to the incident, including whether Duckenfield was responsible for manslaughter by gross negligence.
April 2016 – After hearing testimony from more than 800 witnesses, the jury retires to deliberate.

The long read: To understand how the $60bn company is taking over the world, you need to stop thinking about cars Every week in London, 30,000 people download Uber to their phones and order a car for the first time….

Image copyright AFP/Getty Images EU migrants who come to the UK as Brexit nears may not be given the right to stay, David Davis has said. The new Brexit secretary told Sky News there might have to be a cut-off…