Police chiefs in major US cities may tend to favor more stringent gun laws, but elected sheriffs and smaller departments are likely to support gun rights 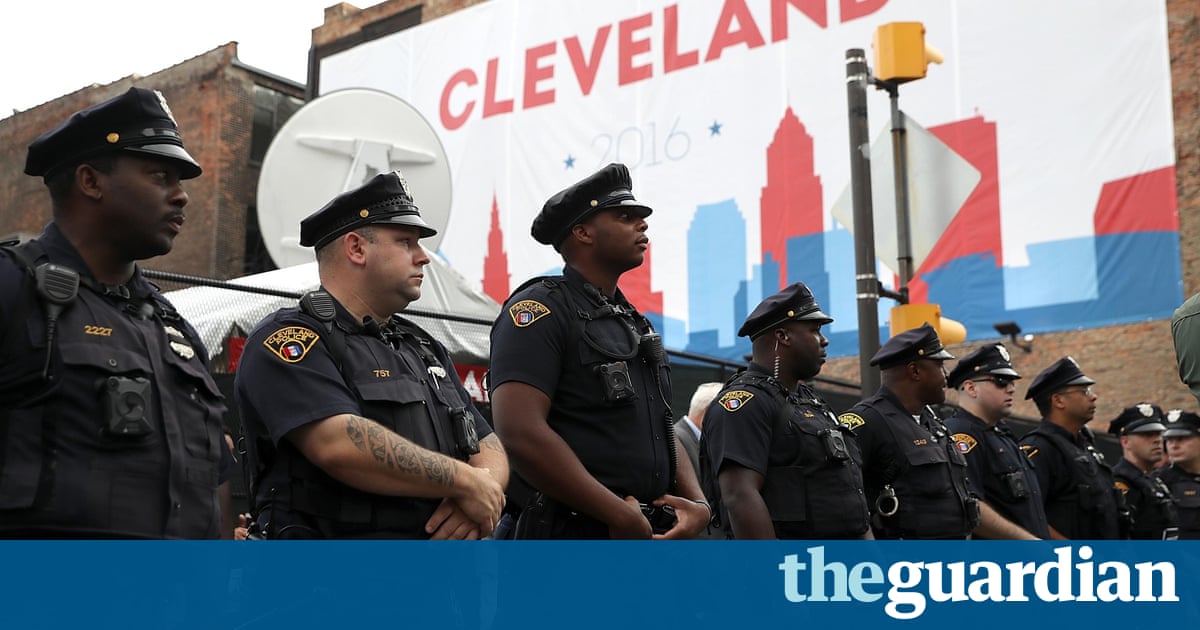 US police officers, on the front lines of gun violence every day, have particular reason to be on edge in the presence of civilians carrying guns, after 11 days in which eight officers were killed in two planned shootings.

With Clevelands open-carry law now also in the spotlight as many fear violence around the Republican national convention, the Cleveland police union went so far as to ask Governor (and former Republican presidential candidate) John Kasich to suspend the open-carry law in the immediate area of the convention.

But Americas law enforcement officials are not reflexively in favor of tougher gun laws. Although police chiefs and major city forces tend to favor more stringent gun laws, elected sheriffs and smaller departments are likely to lean the other way.

When you are around gun violence all the time and you see this stuff, I think it shapes the way you think about your personal safety when youre off duty, Jim Bueermann, a former police chief and the president of the Police Foundation, a research and training group. He said street-level officers are more likely to support gun rights than the police chiefs who oversee them.

Youll hear this from street cops: I dont go anywhere without my gun, he said. Police chiefs tend to take a much more strategic view of crime control than line-level officers do.

After the Dallas attack, police chief David Brown, suggested that policymakers should do their job and do something on guns.

Theres too many things we all agree on on both sides of the aisle that we havent gotten done, he said at a press conference. Brown resisted addressing any specifics of what laws he might favor, saying that he did not want to get in that debate and get swallowed up by both sides who are entrenched in their positions.

But in the wake of the attack in Baton Rouge on Sunday that left three officers dead, the East Baton Rouge sheriff said gun control was simply not the issue.

To me, this is not so much about gun control as it is about whats in mens hearts, sheriff Sid Gautreaux said.

Jennifer Carlton, a professor at the University of Arizona who studies police attitudes on issues such as gun control, said typically, elected sheriffs tend to favor less gun control than appointed police chiefs.

Given that this is a sheriff who is in Louisiana, I think that response is absolutely unsurprising, said Carlton, about comments made by the East Baton Rouge sheriff. It would have been surprising if he had not made that kind of response.

As far as an elected sheriff in a conservative pro-gun state, I am not surprised at all that they would claim it is a question of whats in mens hearts versus a question of gun control. Thats the same thing that happened in Oregon.

After a mass shooting at a community college in Roseburg, Oregon, that left nine people dead, the local sheriff, who had previously opposed any efforts to tamper with the second amendment and wrote to the White House that Gun control is NOT the answer, told CNN his position had not changed.

Sheriff John Hanlin had previously testified against an effort to expand the states background check law.

Police officers are in many many ways no different than everybody else, Bueerman said. Depending on where they are in the country their perspectives might be in line with what the average person feels about gun control in their area.

The political divide on gun control between appointed police chiefs, particularly urban police chiefs, and elected sheriffs is a deep one. After the mass shooting at Sandy Hook elementary school in 2012, the International Association of Chiefs of Police and the Major City Chiefs pushed for tougher gun control laws, including an assault weapons ban, while the Major County Sheriffs Association opposed a ban, arguing these policies would not address the real problem. Instead, the sheriffs pushed the White House to focus on mental health, noting:The nations largest mental health treatment facilities are not hospitals; they are county jails.

The group represents tens of thousands of police leaders who serve millions of Americans, said Jim Johnson, the chair of the partnership and the chief of the Baltimore County police department.

Im a hunter, Im a target shooter, and I think Im much like the other folks I work with here. No ones after banning all weapons. Its not like were going to go like Australia and collect all weapons. Nobodys proposing that, Johnson said. Instead, the group focuses on legislation that would help keep guns out of the hands of people who should not have them.

But some officers have much more passionate gun rights stances than others. Im aware of some officers, for example, that are second amendment strongholds. They dont want to see any restrictions at all, even though those guns can be used against them, Johnson said.

He said he thought the constant coverage of attacks on police officers including attacks using military-style weapons might change some officers perspectives on gun control.

After the San Bernardino shooting, sheriffs in New York and Florida urged citizens to carry guns.

In light of recent events that have occurred in the United States and around the world I want to encourage citizens of Ulster County who are licensed to carry a firearm to PLEASE DO SO, county sheriff Paul Van Blarcum posted on Facebook.

The only thing that stops a bad guy with a gun is a good guy with a gun, Brevard County sheriff Wayne Ivey explained in a video. I am in no way suggesting that we as citizens take on a vigilante role. What I am saying is that we need to be mentally and physically prepared to respond to an attack.

The video has received more than five million views.

Some sheriffs have gone even further, and vowed to oppose federal efforts to push gun control regulations that they see as unconstitutional.

Richard Mack, founder of the rightwing Constitutional Sheriffs and Peace Officers Association and a former sheriff in Graham county, Arizona, is a longtime gun rights advocate.

When asked about security threats at the Republican national convention, and about the police unions push to suspend open carry laws, he said: With all the attacks and shootings going on in our country, I would stay home.

Its just too much of a nightmare there, said Mack. I dont trust the Black Lives Matter people, the protesters Ive seen at some other Donald Trump events. Theres going to be too many people there I just dont see the need, its not a life and death matter to go there.