No explanation given for why handgun, which Zimmerman called a piece of American history was pulled from GunBroker.com amid widespread criticism 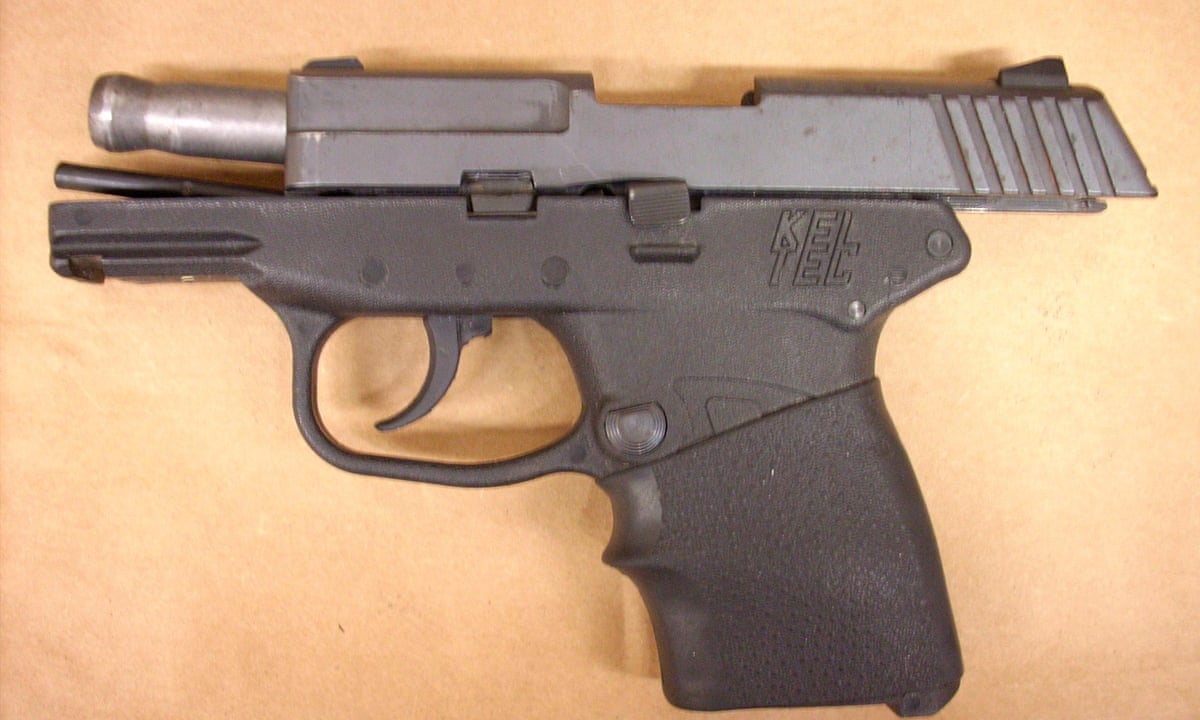 A controversial attempt by George Zimmerman to sell the gun with which he killed Trayvon Martin in 2012 ended abruptly on Thursday when a listing billed as your opportunity to own a piece of American history was removed from a firearms auction website.

The former neighbourhood watch volunteer was acquitted three years ago over the death of the unarmed black teenager in Sanford, Florida, but the case sparked protests and a national debate about race relations.

Zimmerman listed the firearm that was used to defend my life and end the brutal attack from Trayvon Martin on GunBroker.com on Thursday, with a reserve price of $5,000. He wrote in the item description that it had recently been returned to him by the Department of Justice and was fully functional.

But the listing disappeared from the website shortly after the auctions scheduled 11am (EDT) start time, replaced by a message that said: Sorry, but the item you have requested is no longer in the system.

No explanation was given for the items sudden removal and GunBroker.com did not respond to a request for comment from the Guardian asking if the listing was taken down at Zimmermans request or at the websites own behest.

In a statement posted on its website on Thursday afternoon, GunBroker.com said that it took down Zimmermans post, as the company wanted no part in the listing nor the publicity it was receiving. The website added that Zimmerman did not contact anyone at the company prior to posting his listing.

The page had received almost a quarter of a million views before it vanished and attracted widespread criticism. In a tweet, the Washington DC-based Coalition to Stop Gun Violence branded Zimmerman the poster boy for a degenerate gun culture that treats murder weapons as idols to be displayed with pride.

Zimmerman, however, fiercely defended his right to sell the gun, a Kel-Tec PF-9 9mm pistol. In an interview with WOFL, Orlandos Fox affiliate network, he said: Im a free American. I can do what I want with my possessions. He added it was time to move past the firearm and that if it did not sell it would be put in a safe for his grandchildren.

The website listing featured photographs of the gun taken at Zimmermans 2013 murder trial and included a description that stated: Many have expressed interest in owning and displaying the firearm including the Smithsonian museum in Washington DC. This is a piece of American history. It has been featured in several publications and in current university textbooks. Offers to purchase the firearm have been received; however, the offers were to use the gun in a fashion I did not feel comfortable with.

Tracy Martin, the murdered teenagers father, said on Thursday that he had no comment on the actions of that person that murdered Trayvon, continuing his habit of refusing to use Zimmermans name.

In a statement issued through civil rights attorneys Benjamin Crump and Daryl Parks, who have represented the family since the shooting, Martin said: The Trayvon Martin Foundation is committed to ending gun violence in the United States. We are laser-focused on furthering that mission.

Martin and Sybrina Fulton, Trayvons mother, established the Miami-based foundation in the wake of their sons death to promote anti-gun legislation, offer support to other families who have lost a child through gun violence and provide mentoring for at-risk youths.

The listing was timed to coincide with 12 months to the day Zimmerman was shot at in Florida, allegedly by Matthew Apperson, who was later charged with attempted murder.

Zimmerman wrote that he was proud to announce that a portion of the proceeds raised would be used to fight BLM [Black Lives Matter] violence against Law Enforcement officers as well as ending the career of Angela Corey, his prosecutor and Hillary Clintons anti-firearm rhetoric.

He signed off your friend, George M Zimmerman and Si vis pacem, para bellum the Latin adage, If you want peace, prepare for war.

Zimmerman was reportedly banned from Twitter in December but used the platform to voice similar views, including an apparent reference to Martin as a moron, a description of the BLM movement as black slime matters and a retweet of a post showing Martins lifeless body with the caption, Z-man is a one-man army.

The Florida man, a neighbourhood watch coordinator, shot and killed Martin, 17, in February 2012 after a violent altercation in a Sanford housing community. In a police call minutes before the killing, Zimmerman said he could see a real suspicious guy in the neighbourhood who looks like he is up to no good. Martin, who was unarmed, was returning from a convenience store.

Zimmerman was not initially charged, until protests spread around the country demanding a full investigation. He successfully argued at his murder trial that he had acted in self-defence and was acquitted in July 2013. In February 2015 the federal justice department said there was insufficient evidence to prosecute the 32-year-old for hate crimes.

His ex-wife Shellie was placed on probation for a year and sentenced to community service in August 2013 after pleading guilty to a charge of perjury stemming from lies she told at a bond hearing for her husband pertaining to the couples finances.

The same month, Zimmerman was also back in the news for taking a controversial personal tour of the Kel-Tec gun factory in Cocoa, Florida, where the gun he used to kill Martin was made. He was photographed smiling with factory workers, earning a rebuke from his trial attorney Mark OMara for the inappropriate visit.

We certainly would not have advised him to go to the factory that made the gun that he used to shoot Trayvon Martin through the heart, OMaras spokesman, Shawn Vincent, said.