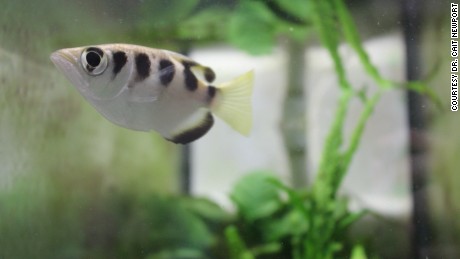 A new study says, Yes, it probably can.
Researchers studying archerfish found the fish can tell a familiar human face from dozens of new faces with surprising accuracy.
This is a big, big deal. It’s the first time fish have demonstrated this ability.
Think about it: All faces have two eyes sitting above a nose and a mouth. And for us to be able to tell them apart, we need to be able to pick up the subtle differences in features.
We’re good at this because we are smart, i.e. we have large and complex brains. Other primates can do this too. Some birds as well.
But a fish? A fish has a tiny brain. And it would have no reason in its evolution to learn how to recognize humans.
So this study, published Tuesday in the journal “Scientific Reports,” throws on its head all our conventional thinking. It was done by scientists at University of Oxford in the U.K. and the University of Queensland in Australia.
And, for us, it raises many, many questions:
Does this mean my pet goldfish knows me? Do fish recognize each other? CAN DORY REALLY FIND NEMO?
To find out more, we talked to Dr. Cait Newport, a research fellow in Oxford University’s zoology department and co-author of the study.
What were the scientists trying to figure out?
The scientists wanted to know how well animals with simple brains do with facial recognition. A fish was a good choice. Their brains lack the section that we use for facial recognition. That made them perfect as subjects for an experiment to see if simple brains can perform complex tasks.
What’s an archerfish?
It’s a species of tropical fish. They spit jets of water from their mouth to knock down insects from branches. They’re the sharpshooters of the animal kingdom. 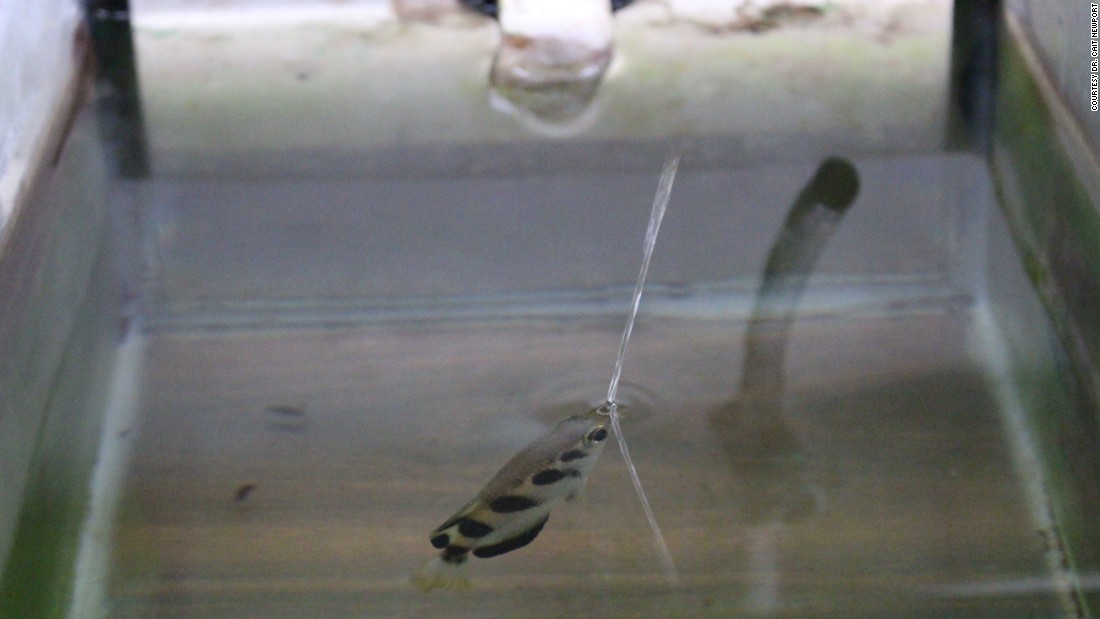 Why did scientists use archerfish?
Archerfish can indicate a choice clearly (the spitting) whereas other fish cannot. “There is no ambiguity in where they are shooting,” Newport said.
How did the experiment work?
Scientists presented the fish with two images of human faces and trained them to choose one by spitting their jets at that picture.
Wait, hold up. How do you ‘train’ an archerfish?
The old, time-tested way. Bribe them. When they spit at the image the scientists wanted them to spit at, they were rewarded with a pellet of food, Newport said.
How long did that take?
In some cases, only a few days. In others, up to two weeks. “Something like 60 to 90 trials,” Newport said.
How many people did it take?
A total of four (really smart) people: Newport and her co-authors Guy Wallis, Yarema Reshitnyk and Ulrike E Siebeck.
What did they do?
They presented the fish with the picture of the face they wanted the fish to learn and a bunch of new faces. Up to 44 new ones. The fish were able to pick the familiar face correctly 81% of the time.
Impressive. And then?
The researchers decided to make things a little harder. They took the pictures and made them black and white and evened out the head shapes. You’d think that would throw the fish for a loop. But no, they were able to pick the familiar face even then — and with more accuracy: 86%!
What will they test next?
They plan to test for other recognitions beyond just faces, Newport said.
Do fish only recognize human faces?
Humans use lots of devices to recognize people, including social cues. “Fish are not doing this,” Newport said. “For them, they are just looking for patterns.” That would answer the question whether Dory could find Nemo.
Finally, for the big one: Does my pet fish know me?
Possibly.
“There’s something like 30,000 species of fish. A blind fish is not going to be able to do this, sharks are fish and they can see color — so maybe,” Newport said.
Then she shared this observation.
When strangers walk into her lab, the fish “act skittish,” she said.
“When I walk in, they start spitting at me — many cases right in the eye.”
How’s that for accuracy?

Every week, we bring you one overlooked aspect of stories that made news in recent days. Did you notice the media forgot all about another story’s basic facts? Tweet @TheWorldPost or let us know on our Facebook page. As migrants…