No one injured in attack, which included anti-Islamic graffiti being sprayed on the fence outside the mosque in Thornlie in Perths southern suburbs 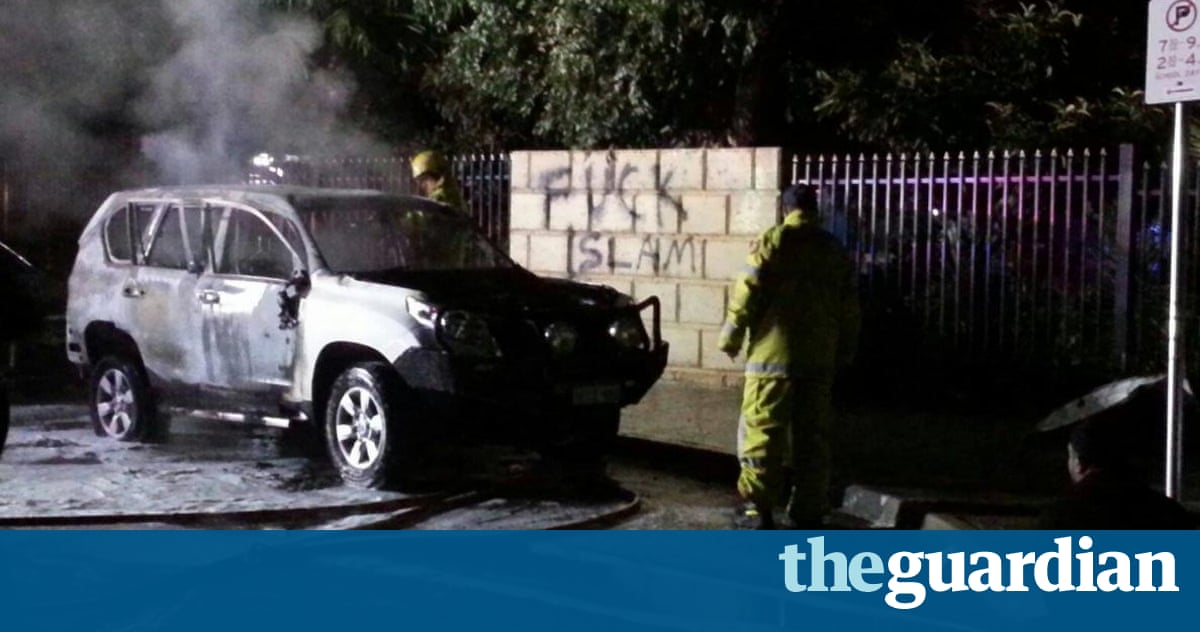 A car was set on fire outside a Perth mosque on Tuesday night as hundreds of worshippers attended a prayer service inside.

No one inside the Thornlie mosque was injured when the white four-wheel drive exploded shortly after 8pm near the Australian Islamic College in Perths southern suburbs. Anti-Islamic graffiti was also sprayed on a fence.

Worshippers reported hearing a loud bang and emerged from the mosque to find the vehicle ablaze.

A Western Australia police spokeswoman said three people had been seen running down an alleyway next to the mosque after the explosion. Police have asked anyone who may have seen suspicious activity in the area to come forward.

A teacher at the Australian Islamic College, Yahya Adel Ibrahim, wrote on Facebook that the Perth community was visited this evening by hate.

A suspected petrol bomb was placed in a parked car outside the Thornlie Mosque & Australian Islamic College with hate fuelled graffiti put on the wall, while 100s of worshippers prayed Taraweeh/evening prayers inside.

Alhamdulillah all worshippers were uninjured.

Thankfully our community wont start hating and playing blame games and singling out groups of people in our society. This, undoubtedly is a criminal act of hate, but it is the act of a person or group not the greater whole.

Despite what just transpired, everyone stayed to finish their prayers refusing to give into the terror that had just occurred. I know the outpouring of support from the community will be overwhelming because Perth has the best, kindest, and most warm-hearted people.

Ibrahim praised police and fire services for their rapid response.

WA Police described the attack as a car fire, rather than a bomb, but said they believed it had been deliberately lit and accelerant had been used. Three other cars were damaged in the resulting explosion.

Mosques in Western Australian have been targeted before. A pigs head was left in a toilet near a mosque at the University of Western Australia in December last year, while a mosque in Rockhingham, south of Perth, was attacked with paint in 2014.

The Thornlie mosque has previously been graffitied with anti-Islamic slogans.