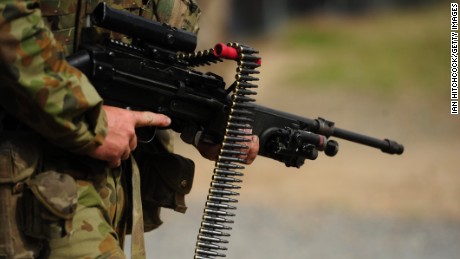 (CNN)Teenage recruits were raped by staff and forced to rape each other as part of initiation practices in the Australian military going back to 1960, a public inquiry heard on Tuesday.

The Royal Commission into Institutional Responses to Child Sex Abuse is hearing evidence from men and women who say they were sexually abused when they were as young as 15, in certain divisions of the Australian defense force.
This commission is focusing on alleged abuse at the naval training center HMAS Leeuwin in Western Australia and the army apprentice school Balcombe in Victoria during the 1960s, ’70s and ’80s and also among cadets with the Australian defense force since 2000.
READ: Pentagon: Sexual assault cases in the military remain constant
In total, 111 victims came forward to report abuse. More than a dozen of them will give evidence to the inquiry in Sydney, which continues until July 1.
“On multiple occasions, I was snatched from my bed in the middle of the night by older recruits and dragged to a sports oval,” said one male witness who wasn’t named.
The witness said he was forced to rape other recruits, and was raped himself by older recruits and staff.
“The environment made it useless to resist,” he said. “One could stand only so much abuse before realizing that saying ‘no’ was pointless. After a while compliance and getting it over and done with seemed the best solution.”
Many survivors say that when they reported the abuse, they were ignored, punished, or told it was “a rite of passage” in their initiation period.
READ: Report: Military punishes sex assault victims
Another witness, 65-year-old Graeme Frazer, told the inquiry that as a 16-year-old naval recruit in 1967, he remembers being “terrified” as he was dragged from the showers, beaten and sexually abused by three other recruits.
He said one of the attackers tried to force him to give oral sex, then they held him down while his genitals were covered with boot polish and scrubbed with a hard brush.
“I still feel a lot of guilt and shame about the abuse,” Frazer said. “I have suffered depression.”
The inquiry also will hear evidence from former and current staff members, and examine the handling of complaints and the responses to claims for compensation.
The inquiry is part of a long-running investigation into sexual abuse in the Australian military.
A spokesperson for Australia’s Defense Ministry told CNN that it is “cooperating with the Royal Commission and supports its objectives to safeguard children. We recognize and commend the courage of those who will tell their own stories of personal suffering throughout the hearings. It is not appropriate for (the defense ministry) to comment in further detail on matters that are before the Royal Commission.”

(CNN)Kellyanne Conway’s husband could become the US government’s next top litigator. George Conway, a corporate attorney who is married to one of President-elect Donald Trump’s senior advisers, is on the shortlist of candidates to be nominated as US solicitor general,…